Ghost child appears in a road trip selfie through Florida 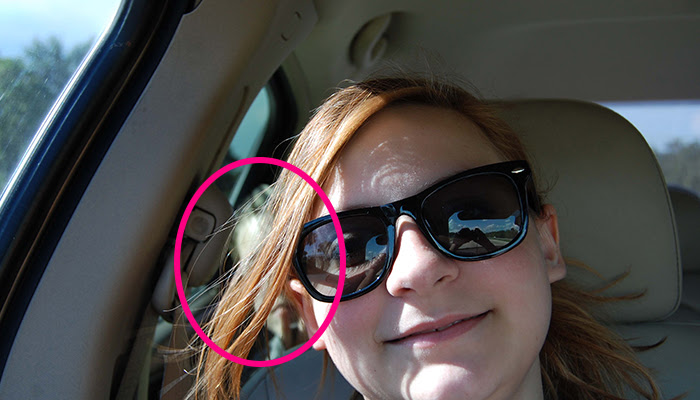 It was just a normal day for Melissa Kurtz, 48, who was driving on a highway in the Maitland area of Florida, near Orlando, to take her 13-year-old daughter, Harper, to a beauty pageant. Harper wasn't wearing a seat belt, which was normal for her, and taking selfies to pass the time.

It wasn't until a month later that this normal day turned into something quite abnormal. Kurtz was looking through the pictures on her camera and spotted a selfie Harper had taken in the car, which had a boy in the background – a boy who wasn't in the car the day the picture was taken

Kurtz decided to do some research on the road they were driving on that day and discovered that there had been an accident on that same road and the day her and Harper were driving on it happened to be the anniversary of the death that occurred because of it.

"Where the picture was taken there was an automobile accident one year ago exactly. When I looked into it, someone had been medevacked away in a helicopter. However they would not tell me any specific details when I enquired, which leads me to believe that it was a child, as that might be why they couldn't provide the information," Kurtz told the Daily Mail.

Kurtz decided to send the photo to Greg Pocha, the director of parapsychology, afterlife and paranormal studies at the Eidolon Project Canada. Pocha was able to use an image analysis program on the picture, a program that is also used by the FBI and CIA, to determine that the boy had no color or temperature, which could prove that the photo was indeed real. He also had a reason as to why the ghost may have appeared. 'To warn may be the purpose, the unfinished business, of this ghost. To warn others how not to meet the same fate as others who have died because seat belt issues. It probably saddens him when he see that."

i looked at the before and after photos and noticed you can see "the boy" in the first pic. you can see his/her shoulder in the sunlight. this suggests to me there was a person in the backseat but a live one.

hope you guys are doing well.

What appears to be a shoulder is actually the edge of the headrest.I am the person mentioned who examined the photo.
Greg Pocha,
Eidolon Project Canada