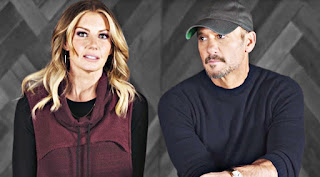 Never having been warned that they were inside a haunted space, their daughter said something that raised the hair on the back of their necks as soon as they stepped inside.

Back in the late 1990s, Tim McGraw and wife Faith Hill were looking for a home in Los Angeles, but weren't planning on purchasing one because they would only be there for a short period of time while they worked on various projects.

While trying to bargain with the owners of an estate that formerly belonged to legendary singer Frank Sinatra, Tim and Faith had a freaky encounter that involved their eldest daughter, Gracie.

During a final walkthrough of the home and a last-ditch attempt to convince the owners to rent Sinatra's former home to them, rather than make a purchase, little Gracie walked right over to the piano, but what happened next will send chills down your spine!

The toddler, who couldn't have been more than four years old according to Tim's recollection, made a bee-line toward the piano immediately after they walked through the front door.


Not thinking anything of it, Tim, Faith and the owner's real estate agent continue walking through the home - and that's where things take a chilling turn.