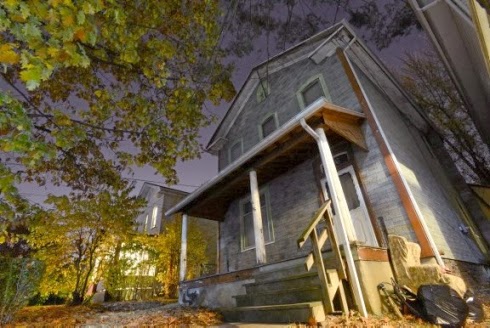 Known as Pennsylvania's own  Amityville horror house, 46 South Welles Street was widely reported in the 70's as being a more dangerous haunting than Amityville.

After living in the house for a month in 2013 and being face to face with extreme paranormal and demonic activity, Tim Wood [LiveSciFi creator and lead ghost hunter] decided to buy it last December. This weekend, he and his team will be back at the haunted house practicing their unique brand of live ghost hunting and streaming it online for all to see.

While performing his extreme paranormal investigation techniques, Wood will be cataloging any new conclusive evidence or sightings that occur in order to be featured alongside the proof of paranormal activity he encountered during his previous stay. The paranormal evidence will be featured in an upcoming documentary about the Welles House and its history of true evil. Paranormal Evidence clip.

Welles House timeline as reported by the Times Leader and Citizens Voice -
Info about the haunted house on Welles St.

-1976 Bennett Family Moves into house - would later be forced to leave with only their clothes on their backs, in 1978.

-Unexplained bangs, and scurrying noises from one end of the house to the other.

-Nightly visits from a well-dressed phantom man and the appearance of a ghost of a young girl who walks through doors.

-Shrieks, moans, and crying that seemed to be coming from the attic and within the house’s walls.

-Bloody spots appearing on walls and floors in the living room.

Get all who not believe in ghost and said all we are imagination lock inside all night and see in a morning if was change a view or not.