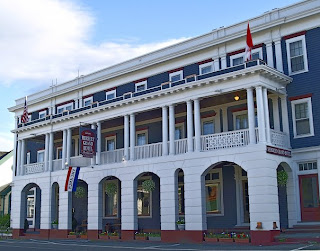 KINGFIELD — Guests have told Dawn Sova of a little girl sitting on a bed, asking to leave, then disappearing. Of a ghost man walking a ghost dog down the hall.

Dawn Sova, rooms division manager, stands in Room 318 of the Herbert Grand Hotel. The room is rumored to be haunted after a guest at the Kingfield business reported seeing a long-haired woman brush past him in the bathroom as he was getting ready for bed. Another guest, staying in the room on a different date, reported seeing a man walking a dog down the hallway. The man and dog disappeared before the guest's eyes.

Guests and employees of the Herbert Grand Hotel in Kingfield say strange things happen in the 1918 hotel.

One guest reported seeing a little girl sitting on his bed asking to leave the hotel; another saw a long-haired woman brush past him in his room.

Former chefs at the Herbert Grand Hotel in Kingfield reported seeing shadows move about in an empty dining room of the 1918 hotel.

Herbert Wing's home, now the Herbert Grand Hotel, was not a business in his day, but a place to stay if he liked you and your politics.

A year ago, a man approached the front desk and asked to see where the murder happened in the basement.

First she'd heard of it.

"My reaction was, 'Tell me more!'" said Sova, 63. "I hate to be so enthusiastic about it, but tell me more."
Like Herbert Wing 60 years before, Sova lives in the stately Herbert Grand Hotel. She answers the phone, greets guests and collects stories.

There's no shortage of tales.

Wing, who called the place home for four decades, wielded the unlikely authority to have the town's power cut off at night when he went to bed. He demanded his wood be stacked in matching piles. He held particular disdain for Democrats.

Then there are the recent tales, the ghosts. Sova has never seen one, but she is open to it. On the rare occasions that she's been alone in the enormous building, she has thought, "OK, Mr. Wing, please talk to me."

"I guess guys don't like a desperate woman," she quipped.

Sova's son, Rob Gregor, has given her the title "rooms division manager." He bought the hotel in 2009 and she offered to pitch in when his new manager abruptly quit. A New Jersey transplant, she still travels back home to get her roots touched up.

A hotel has stood at this Main Street spot, in the heart of the downtown, since 1830. The first burned in 1880. The Kingfield Hotel went up in its place. The story goes that Herbert Wing bought the Kingfield around 1918, razed it and built his hotel and home anew. Sova has her doubts. Looking at historical photos of the Kingfield, the bones of it look awfully similar to the Herbert Grand.

"There's the legend and there's the truth," she said. Sova isn't sure which is which.

Wing was born in Turner, according to newspaper clippings in the Maine State Law and Legislative Reference Library. He was a lawyer and helped found Kingfield Savings Bank.

Wing was important in the early days of Franklin Memorial Hospital and served in the Maine State House from 1909 to 1910 and the State Senate from 1913 to 1914. He had a hand in a number of businesses, among them a local lumber mill.

The mill supplied electricity to the town, Sova said, and the foreman had orders to turn the power off when Wing went to bed and to turn it back on when he woke.

"It's amazing one can get away with that," she said.

From what she's gathered, Wing ran his home less as a hotel and more as a place to stay if he liked you and your politics (preferably Republican.) He stopped opening the property to paying guests in 1929, though maids still cleaned the rooms each week.

Wing finally sold it in 1956 and died in the hotel two weeks later, on Christmas Eve, at age 89. The slate blue building has had roughly eight owners since.

Its lobby is ornate with wood details and exposed light bulbs with glowing orange filaments. Most of the furniture in the rooms is original to 1918.

Sova has had townspeople tell her they believe the third floor is haunted because the windows are so dark. She has an easy answer for that: She typically books up the second floor first.

She doesn't have an easy answer for the stories about Room 318.

A man staying in that room once heard a dog yipping in the hallway. When he looked out, he saw a man with a high collar walking a dog on a leash, and when he followed them, they disappeared.

Another guest staying in that room felt a hand brush against his back as he stood at the mirror. He turned to see a woman with long, dark hair running away.

"He came to the desk, 'Is there anything strange going on at this hotel?'" Sova said. "He did ask to be moved."

A guest in Room 201 — rumored to have been Wing's former bedroom — reported a visitor as he sat tying his shoes.

"I looked at him, 'OK, is another person putting me on?'" Sova said. "There's a print in that same room of a little redheaded girl."

Maine Ghost Hunters explored the hotel last year. They told her they would like to come back.

She hasn't been able to track down the rumored murder in the former bar/basement. It might have been in the 1970s and it might have inspired the fictional Dead River Inn bar in Paul Doiron's novel "The Poacher's Son."

Sova hasn't had any paranormal experience beyond seeing shadows pass in front of windows, particularly in the kitchen.

"I've always felt a warmth; I haven't felt frightened," she said. "This was such a big part of (Herbert Wing's) life, he had to leave something behind."

The subject of Hotels in Maine has been covered intensively by the world press over the past decade. Many an afternoon has been enjoyed by a family, bonding over the discussion of Hotels in Maine. While much has been written on its influence on contemporary living, spasmodically it returns to create a new passion amongst those who study its history. Inevitably Hotels in Maine is often misunderstood by the easily lead, who form the last great hope for our civilzation.