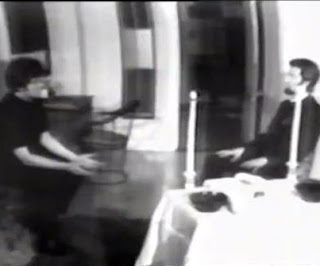 First Televised Exorcism! Recorded in Chicago, IL on NBC in 1971. Just in time to creep you out at Halloween, Here is the original video that inspired last night's episode of Paranormal Witness on the Syfy channel

"The Tenants" reexamines Chicago newlyweds Edwin and Marsha Becker become homeowners for the first time after buying a "two-flat" in 1970. .Soon after moving in, paranormal activity--flickering lights, plates flying out of kitchen cabinets--kicks in and Marsha realizes that there are ghostly tenants living in the house with them.

While rooting around in the basement, Ed discovers sinister secrets about the house's former occupants. When the paranormal activity reaches an all-time high, the Beckers organize an exorcism, which becomes the first nationally televised exorcism in the U.S. when it is broadcast by NBC in April 1971.

Some of the other paranormal phenomenon experienced by the Beckers, included the independent opening and closing of doors. The Beckers also said the string holding their bathtub plug would wrap itself around the faucet, house keys would be moved, the telephone would come off the hook and the mixer flew off the wall. They also heard a crying woman.

I found very useful and interesting posts in this blog which is the great signs for a good blogger.
Lenovo Laptops