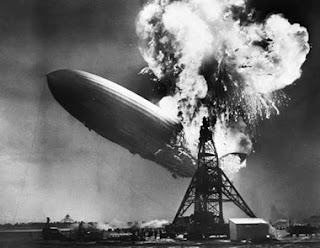 Seventy-five years ago today, the massive German airship Hindenburg burst into flames while landing at Lakehurst Naval Air Station in Lakehurst, N.J. The spectacular disaster, one of the most famous in American history, claimed the lives of 13 passengers, 22 crewmen and one ground crewman.

Ever since, the legend of the Hindenburg airship and the disaster that destroyed it has grown. The place where it happened is still there. The actual site of the Hindenburg crash at the Lakehurst Naval Air Station is marked with a chain-outlined pad and a bronze plaque. This memorial was dedicated on May 6, 1987, the 50th anniversary of the disaster. Not far away, Hangar No. 1 still stands. That is the massive hangar that would have housed the 804-foot-long Hindenburg airship, if it had not burned.

Many of the people who work at the Lakehurst station believe that the people who were killed on that tragic day still roam the place. Even the television show “Ghost Hunters” conducted an investigation at the site. And it should surprise no one that this place could be haunted. For those who survived, the tragic events of May 6, 1937 would never be forgotten.

On that afternoon, a spring cold front was blowing into Lakehurst off the Atlantic Coast. Lt. Cmdr. C.E. Rosendahl was the commanding officer at Lakehurst. He and his crew were awaiting the arrival of the huge airship, the largest flying object ever built. Capt. Max Pruss commanded the Hindenburg.

As the airship attempted to land, it suddenly exploded into flames. The rear half of the Hindenburg was totally enveloped in a bright orange fireball. An eyewitness standing a half-mile away on the ground said a blast of intense heat blew over. Then, a blow torch-like flame shot out of the airship’s nose. The great airship, the pride of German might, crashed to the ground and burned.

Ground crew and rescue workers desperately tried to find survivors in the inferno. Burned and injured people were taken by ambulance to local hospitals. One of the hangars was quickly turned into a temporary morgue. One of the ground crew, 51-year-old Allen Hagaman, died from burns he suffered when the hull of the ship fell on him, according to a Web site.

The morning after, the burned metal frame of the Hindenburg was still smoldering. Eyewitnesses could detect the horrible smell of burning flesh in the air. Some people were still unaccounted for. A group of men and women silently filed past the charred bodies of some of the victims in an attempt to identify them.

Today, the Lakehurst station still operates. The old hospital is now a clinic and some of the people who work there have seen and heard things that no one can explain. They talk about hearing strange footsteps, doors rattling and loud unexplained crashes. They have also seen lights flashing on and off for no reason.

One staff member was working alone in the building when he heard a loud crash in the clinic area. When he went to check it out, he saw where a large pamphlet rack had fallen and pamphlets were scattered all over the floor. The staff member said out loud to no one in particular, “I didn’t make this mess. I’m not cleaning it up. You are.” The man then went home.

The next morning, the rack and its pamphlets were back in their proper place. No one knew how they got back that way, according to a Web site.

Other people talk about seeing a mysterious naval officer who walks around Hangar No. 1. Some people say they have seen an airman wearing vintage gear from the 1930s walking around there, too.
And if you listen closely, you might hear the voices of men frantically shouting, “Away the lines, away the lines!” and “She’s afire!” coming from the area near the hangar. That is the place where the Hindenburg crashed.

Today, you can also tour the site and I hope to get that opportunity someday. Perhaps, the ghosts of the Hindenburg are there to remind us about the fragility of life and that we are all mortal.

Source: The McDowell News
Posted by Eddie on Things at 9:57:00 PM